I always say, it’s the things we love the most that will bring us down in the end. I hope grape juice is not one of those things. I love grape juice. The unfermented kind. I love everything about it; the color, the tart sweetness as I gulp it down, the sound of ice cubes rattling as I sip it. Even though it’s 100% fruit juice, and contains natural sugar, it is still a sugary drink so I must be careful. Even though I water it down, those calories can add up. Especially on hot days when I want to gulp it down, glass after glass.

Looking at a chart, I see that table grapes are not that high in vitamin A nor vitamin C. (100 units of A and 4 units of C in a 100 gram edible portion.) This is why vitamin C is added to a bottle of grape juice.

Suellen Ocean is the author of many books on diverse topics. Her books are available here:  http://www.amazon.com/Suellen-Ocean/e/B001KC7Z78

You’re going to be surprised when I say acorn dip but it’s true. I can’t tell you how many times I’ve taken acorn dip to a party, only to have the teenagers obsessing over it, especially the boys. I’ve come to conclude that there is something in the acorns that a growing teenager’s body needs. And acorns bring that special flavor, like Mediterranean olives or pungent cheese. The acorn dip is fashioned after your typical onion dip except I use dried onions from a natural foods store and I add a small bit of soy sauce. Surround the dip with Aztecan Blue Corn Chips and you have yourself an unusual hit!   Suellen Ocean is the author of Acorns and Eat’em, a how-to vegetarian cookbook and field guide for eating acorns. Find it here: http://www.amazon.com/Acorns-Eatem-How–Vegetarian-Cookbook/dp/1491288973

After I wrote “Acorns and Eat’em,” a how-to cookbook for gathering and preparing acorns, I wanted to share what else I had learned while living in the mountains, far from the grocery store, with a limited budget. Y2K was fast approaching and survivalists were sending me checks for my acorn book. Obviously there was a feeling in the air that hard times were sure to come. I care about people and nutrition so I continued creating unusual recipes from simple, natural, unprocessed ingredients. For example, in “Poor Jonny’s Cookbook”, my recipes teach you the art of making biscuits from scratch with minimal ingredients. Our great-grandparents knew how to survive, we need to follow their example and return to the basics. There’s a little bit of everything in this cookbook, my hope is that when you use this book, you’ll get into the flow of cooking with what you

Rhubarb has a most unusual consistency, it’s kind of gooey and stringy but perfumey to the palate and according to my old herbal, is a great tonic. The leaves are poisonous but after removing them the stalks can be cut into one inch pieces and simmered lightly in a few tablespoons of water. Pour the steamed rhubarb into a bowl and add honey to sweeten. This “sauce” can be used as a side dressing for whatever your imagination drums up. Just present the bowl of cold sauce at breakfast and have it with eggs and potatoes or have it as a side dish with dinner alongside brown rice and your favorite protein and salad. Because it’s believed to be an excellent tonic and facilitate the action of intestinal cleaning and to be good for the liver, a bowl of rhubarb sauce at the buffet table is a welcome sight. Suellen Ocean is the author of the vegetarian cookbook, Poor Jonny’s Cookbook. Available here: 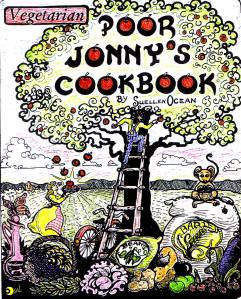 I know, I know, it sounds like a hot romance but I’m referring to the spice annatto, of which the official name is achiote entero. I was at the grocers spice rack the other day and a man next to me was looking for annatto. “I’ve been experimenting with it,” he said answering my curious inquiry. “I use it for coloring.” So, not to be out done, I grabbed my own bag of annatto and stared at it for months, the red colored pulpy seeds stared back and I wondered why I bought them. I don’t need coloring in my Mexican food, the chili powder (which probably has annatto) gives it enough color. But I finally succumbed and threw a little, just a pinch, into my soup and was surprised at the little bit of unusual flavor it imparted but disappointed that there were a few hard pieces that were like tiny rocks so watch out. Annatto is a popular addition to Latin dishes and is used by dairy farmers to color butter coming from cows who don’t get enough vitamin A in their winter feed.

Coriander is called a seed but it is really part of a tiny fruit. The seeds are used to flavor cookies, cakes and candies. Cilantro is the foliage of the same plant and it is used fresh or dried. Freshly chopped green cilantro leaves mixed with chopped tomatoes and onions used, as a topping for tacos, burritos and other Mexican dishes will have you hooked on this plant. The fresh leaves are especially refreshing and tasty.

Mustard provided a flavorful spice to our medieval ancestors. As a condiment, mustard is a mixture of black and white mustard seeds. The Germans like their mustard from black mustard seeds as do the French but the English differ and go for yellow or white seeds, which are milder. If you’re wondering how to be creative with this spice, buy a package of mustard seed, open it up and taste one or two in your mouth. They are tasty and tangy. To my taste, I could see adding a pinch of the seeds into gravy,  soup Italian dishes and especially to potato or pasta salad. The release of the oils when one bites into the occasional mustard seed equals a culinary delight.

I’ve found that the act of merely reading a cookbook will make you a better cook. It’s a lot like looking at a fashion magazine. You get ideas. Trust your mind to store enough elements of that spicy Spanish rice recipe and trust it to remember the way the Italians threw an egg in the middle of some dough to make egg noodles. I have a whole shelf full of cookbooks and you may too. There is no way that I have the time to make all the tantalizing recipes in those books but I do have the time to now and again put my feet up and read about how others spend their time in the kitchen. What spices do they use? How high do they turn up the oven up for desserts? What fruits do they throw into salads and what type of greens do they use? When you’re cruising through the produce isles, a red light will go off and you’ll grab that green pepper for stew, the mango for salad and the sweet potatoes for a different piecrust.

An early American classic. Fried green tomatoes have been enjoyed in the early summertime for many years. Why wait for the red ones, we’ll have plenty of those. When the big green tomatoes appear, enjoy a treat quite different than red ripe tomatoes. Slice green tomatoes and dip in a beaten egg then into dry corn meal. Lightly oil a skillet. Over medium heat cook covered about 3-4 minutes, turn. Cover again and cook until done. Options include adding garlic or onion powder to the beaten egg and Parmesan cheese as a topping.

Tofu…  How do you cook it? You can fry it like bacon, break it up and boil it in soups, bake it, microwave it, broil it, steam it or any other way you can imagine. Cooking it in a cast iron skillet that is only lightly oiled, then cooking the tofu over medium heat with a lid on will give it a combination steamed/fried effect. Tofu can be cooked this way, then served with gravy. It can be cooked this way then marinated.